UNTIL last year the R 1200 GS was fundamentally still the 2004 model, albeit following a few major upgrades. The fact that their globetrotting adventure bike could still cut it in a world where 150-horsepower monsters with different riding modes are almost the norm is testimony to how right BMW got it in the first place. The only way to see just how far BMW have brought their latest GS is to pitch the new against the old. 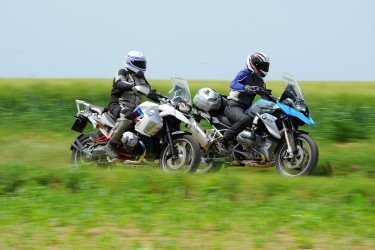 The 2012 R 1200 GS Rallye looks the part, especially with its exposed red frame and BMW Motorrad colours highlighted against the white bodywork. It comes complete with more goodies than a Christmas hamper; heated grips, hand protectors, trip computer, Enduro ESA suspension and a fancy adjustable seat. You climb onboard and feel instantly at home.

I’m keen to dive off into lush countryside but some kind of farm vehicle that looks like a gigantic instrument of torture is crawling along in front of me. The Rallye lurches more than once, over-reacting to small throttle movements as if it’s just as frustrated as the file of cars queuing impatiently for the chance to pass. The 2013 bike has a similar eagerness, but it’s less pronounced.

By comparison to the 2013 GS, the Rallye turns as though the front wheel is spinning in thick soup. It has a heavy, almost tired attitude to its handling against the newer model’s unquestionable agility. Where the LC’s throttle is light and instant without being snatchy, the Rallye’s feels weighted. BMW has tailored the light-footed sensation that a sportsbike offers to suit their new tall-rounder.

The handlebars feel slightly lower and the front end more direct and responsive than the older version. It falls into turns with the same top-heavy sensation as before but with more urgency and intent, and where the 2012 bike has an agricultural competence this newer GS feels as though its mechanics and electronics are all made of fairy dust.

The completely redesigned 1,170cc boxer engine uses Formula 1-derived ‘precision cooling’, a combination of air and liquid cooling for better heat dissipation. On paper, the latest GS has only been enhanced by a few torques and 15 horses, but your brain’s perception of acceleration and speed at least double the gains. The dyno chart tells a clearer story. Where the 2012 GS has a well-known dip in torque and power between 5,000 and 6,000rpm, the 2013’s curve is almost reversed in that area, suggesting that the difference in midrange torque is closer to 10lb.ft – more than enough to notice.

Steaming through faster turns, the Rallye wriggles as though the front and rear end are joined by a hinge that someone forgot to tighten. The 2013 GS is solid – at slow speeds, high speeds, cranked over or in a straight line. I begin to wonder if this isn’t the most accomplished true all-rounder currently available.

The only thing that it doesn’t do better is change gear. There’s no fault as such, but it does clunk noticeably through the gearbox even though it’s only covered roughly 300 miles more than the smoother 2012 model. Other than that, it is head and shoulders ahead – and yours are incidentally protected by a very practical windscreen. 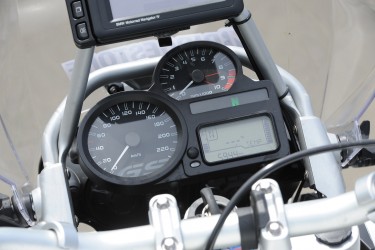 Previously, you had to stop and fiddle with two separate knobs to adjust the screen’s height. Now there’s just one, easily accessible dial that you can reach on the move. The panniers also now use the RT’s far simpler locking mechanism to attach to the bike, the clutch lever is noticeably lighter and even the mirrors vibrate less and offer a better view. The fuel consumption is almost identical between the two bikes here and the braking power is also similar, although there’s some play in the 2013 model’s front lever which gives a slight delay in the initial response.

The previous R 1200 GS was never really broken, so how could BMW possibly try to fix it? Well, it looks like they found a way.